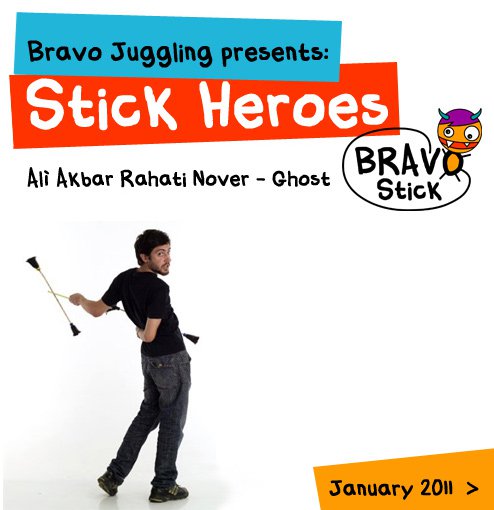 Ali Akbar Rahati Nover, or on his YouTube name 3FlowerGhost got into our hearts when he spined 3 sticks at the same time: two with the handsticks that he held in his hands and one on the handstick which he constraned between his legs. Gorgeous stunt and this is just one of Ghost's innovative and ingenious tricks.


Age: 22 years old in March
Nationality: I'm half Iranian and half Italian
Place of living: I'm living in Pescara, Italy until the end of my studies
Job/school: University of Psychology
How many years have you been juggling with sticks: Over 6 years. I started in August 2004

Number of juggling sticks you have:
I've got 17 sticks (not counting the sticks that are broken or lost), 5 of them are devilsticks, 2 fire flowers and 2 20cm flowers. They each have a name.

Your juggling achievements (prize / performance / trick that you are proud of / etc.):

* Second place at 1st contest of street artists of Omegnac
* Performing in some galas (2008, 2010 in Ascoli, 2011 in Empoli)
* Stage of technique and theory of contemporary flowersticks in Empoli, 2011
* Collaboration video with a documentary on buskers in Rome
* Exhibition in a cabaret contest shown on local TV
* Collaboration with the play for creation of flowerstick on commerce
* Writing a short biography for Juggling magazine, and writing articles on devilsticks
* I'm proud of 2 tricks (I love them like my sons): the double heli and shower.
* I hold the record at EJC at Karlsruhe 2008 for endurance of the double propeller: 1 hour and 4 minutes
* I created a siteswap just for the devilsticks.

Other juggling equipments you play with:
I've enjoyed learning the stick, the poi, the 5 balls, clubs, contact and a little bit of penspinning. But I would not go beyond the basic trick. I take much inspiration from the clubs to do my tricks.

Are you member of any team/group/club/association:
At the moment I play alone, but in the future I'd like to play in a company of contemporary circus.

Please write some sentences of yourself in general:
The flower was my first love and immediately I committed to discover and pull out all its hidden potential. I study my tool, from mathematics to physics and now the mechanics. I consider myself a 'flowerstick nerd' and hope I'm not alone, though so far I have not seen anyone else work like this.

Why did you choose this juggling tool and where did you first meet with it?
I first saw it at a national Boy Scout camp. There were guys who juggled and helped me to build the first devilstick. Since then I have not stopped.

Where did you learn playing with sticks?
There were no jugglers in my city or surrounding area when I started. I learned what I know on the internet. I wanted to learn more and more, so after I learned all I could find on the internet I began to invent tricks of my own.

Which trick did you find the most difficult to learn?
I think the most difficult trick was the fish. Starting from only the first sentence was not the way to do it, and I did not use a good technique. Now when I teach it to others, I can shorten them down at least one lap in time in a few days.

What are you practicing at the moments?
Unlike many tools, the flower has no technical basis or theory (as in the siteswap toss), then I started to study it in all its aspects: First with the theory of the poi, then the permutation to study change movements of handstick in one hand trick, I divided the trick in a binary order from which they invented a siteswap for the devilstick. Now I'm studying the staff antispin, The Differential Steering of applied mechanics and the possibility of making bi-trick, which is to perform a trick with 2 flowers in the same hand.

Do you have tricks that you created?
On the internet and around the world there are many tricks, but most are for people with entry-level to medium skill. For years, I continue to improve more with the fruits of my imagination. About 90% of what I do are tricks that I've created.

What are your favorite tricks?
My favorite trick is quite simple, the two hand propeller (or propeller left-right), which I think is very scenic, technical and not too difficult. I also like the double flower but I love the helicopter. I can't do it for very many laps, but it's beautiful to see.

What are the most difficult tricks you can do?
I do not do this often: As I get on with a one hand propeller, the other flower falls on my foot. I take it back to the kick-up in flight, which launches it from behind my head and take it back with my arms crossed. I do not know the madness that I thought the first time I saw a fellow do this, but luckily I managed to film him with a flower. But perhaps the most difficult trick is the reverse Treble. I've never seen it done with clubs. Perhaps there is a reason for that.

What is the most difficult trick that you would like to learn?
All the tricks I do are invented, so I do not know. I never managed to learn the three flower as I should. I also left the project. I hope to resume soon.

In what style do you play and what other styles do you like?
Usually those who do have flower have a character similar to each other: contact with the flower, tricks with handsticks, they use a lot of play in a helicopter, but mostly I noticed that a lot of play is so fast and confusing, not knowing why they are doing that trick. I have eliminated all these elements and started to use the theory of the plans of them, use more bodythrow and tricks done only with the flower, with a style perhaps a bit too methodical. I approached the trick with the club, carrying albert, treble, backcross in this tool. I like to use difficult tricks, but visually striking. Most of all I love playing slow and smooth, becoming one with the movement of my stick.

What do you do on a normal day, how many hours do you practice?
Before I started my current studies I played every day, a few hours a day. Now with other studies it is always difficult to train. As soon as I have free time, I cannot live without my flower. When I feel their absence I start tossing hold any object at hand.

How and where do you practice?
I am very lazy and I have always played indoors. Fortunately the flower, unlike many tools, does not always need large spaces. But unfortunately, I was penalized because I'm not good at heights.

Do you perform with juggling sticks?
I have always enjoyed performing. The greatest satisfaction I get is when I meet people after my performance who had previously despised the flower, which means that I changed their mind about it.

Do you teach juggling?
I have always taught. First as a friend to have someone to play with, then a few years to teach juggling in Pescara in a small circus school. I recently did a seminar where I taught the theory and how to build a show on immersion flower/devilstick that lasted three days, for each level.

Why do you like juggling sticks?
I like to create tricks. I like to move. But mostly I love the world of juggling. For me, the flower is no different from a club. In fact, you are under the limits since they do not have a head and a handle. I do a lot more attention to the rotation to give the flower. When I play with the flower is a constant chase. I have become an extension of the flower (and not the other way around as you might think).

What are your strong/weak points?
My strong point is that perhaps they are very methodical and schematic. Study in detail my tricks and variations, so that they could also be made with a devilstick. I have a good imagination that sometimes goes beyond my capabilities. My weakness is that I do not have a good height control. I do not like to detach from the flower too much.

What kind of sticks do you prefer to use?
I never managed to find a flower that meets all my needs. I built a single flower from sticks of different brands, it has different body and flowers. Even the handsticks I cannot find on the market, because of the smaller size and diameter.

How is juggling life in Italy? Are juggling sticks popular?
When I entered in this world of juggling the flower was not considered for jugglers. I did not like those who were devil. For some years the flowersticke increased and since I started to perform, is also narrowing the gap between the juggling sticks and toss.

What is your goal related with juggling sticks? What is a challenge for you?
I really like to follow trends and developments in other juggling gear. One thing I noticed is that the stick has never had its real breakthrough. Even the Hoola hoop has passed. It has always been considered a secondary tool and even those who practice it do not go beyond the basics that are already known. They cannot have their own personality. I have often heard that the flower is not juggling. My goal is to continue it, to show the world that there are the usual 4 tricks, that this tool has nothing less than a club or a ball.

How do you imagine yourself being old? Will you still juggle?
Maybe I do not juggle, but I hope to convey my passion to my future successor. Would make me really happy.

Can you imagine not juggling sticks any more?
Only if I have both arms in casts... but in that case I will still find the foot!

What advise do you to beginner/advanced stick players?
Watching others, learning from them, and then do everything you can not to follow them. Finding the way to be unique, but with the knowledge of other people. Learn everything you need to know and once you are done, learn from what you do not know. But mostly, play from the heart.