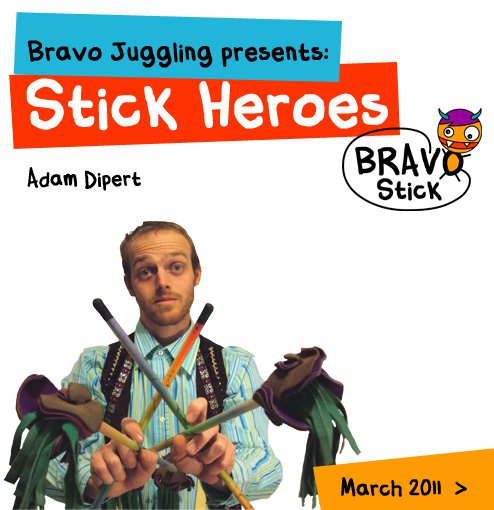 For Adam Dipert, learning is very important, he is at the cusp of a full formal education, he's getting his Ph D in physics. Since 2002 he's been focusing heavily on object manipulation, he has won some international competions of juggling sticks and plays many other props on advanced level, too. He told us that he hadn't eaten meat for 10 years!

How many years have you been juggling with sticks: 10 years

Number of juggling sticks you have: 8 - 12 sets

Other juggling equipments you play with:
I really enjoy Sphereplay (contact Juggling), Poi, Diabolo, Juggling (balls and clubs), Double Staves and a lot more. I've got many many props in my bag.

Are you member of any team/group/club/association:
I live in a community known as the Circus Farm in Mesa Arizona. We do performances, workshops, events and a monthly spin jam (2nd Fridays of each month). I will always consider myself a member of the Jest Jugglers Juggling Club from Columbus OH. I've been a part of many performance groups throughout the years (ExtraTerrestrial Circus Experiment, Kristina Isabelle Dance Company, Try Out Toys Entertainment (Sphereplay crew), Grimaldi Circus, etc.). I've maintained my IJA membership for a few years now.

Why did you learn to use this juggling tool and where did you first meet with it?
I had first learned of the sticks from my friend David, when we were 12 years old. He had seen them at the Tuxedo Renaissance Festival in New York. He didn't know exactly how to build them but we tried. The sticks we built were terrible but I learned the helicopter and tick-tock. My interest at this time lasted for about 4 months. Then I put them down.

When I was 17 and went to another Renaissance Festival in Ohio I found another terrible pair of sticks and bought them and started playing everyday. It was at a time of transition in my life and I was looking for something to focus my energy on.

Where did you learn playing with sticks?
I learned in my living room. I lived alone in a two bedroom apartment in Ohio. I spent a lot of time playing alone and just finding the groove. I had some days where I leveled up every hour and some weeks when I just focused on repetition. I hung out in my apartment and would play day and night. It was a really wonderful time in my life. I had found this beautiful way to dance and explore and the sticks and I were together in our solitude. Later when I started traveling, finding out that other people had feelings about their props and finding out that there is a whole community of people who identify with object manipulation gave me a big boost. Eventually I found out about and then bought the Stix Guru DVD and his style was very consistent with mine. I really enjoyed seeing what he thought about stick playing. Many years later when we met, it was everything I hoped for.

What are you practicing at the moments?
Right now I'm working on two baton sync and async patterns. i.e. While playing, if you start to do a propellor then start to rotate your handstick (around it's long axis), you can make circles with the baton. You rotate the handstick at the same speed that the revolution of the baton makes. This results in the handstick and baton always touching in the same place. It is a very challenging task with both hands at once. There are many opportunities in this area and when I feel confident enough, I'll post a video about it.

Do you have tricks that you found out?
I have a number paths for the sticks which have come from more fundamental principles. The fishtail pattern is one that I had a wonderful time learning. I had been working on propellors on my left and right sides in both directions while turning around in a circle. So that the baton would stay oriented in roughly the same place in space with me doing laps. I had the infinity down very well with both hands at this point in time and I wanted to find a way to do something similar in the vertical plane. To find a path where the baton would move from my right/left side to my left/right side in the vertical plane without loosing contact with the handsticks. I explored and worked on it starting in Dec 2002. There were many times that the baton struck my arm or just went flying across the room. But the concept was clear in my mind.

In February 2003, I had it. At first I just used it to transfer from one side to the other. But then I started increasing the challenge in the usual way, continuous repetitions. And it turned into a new move. A few years later (probably 2004) I saw MCP working with the contact staff and she was doing them also and called them 'fishtails'. It made sense that this pattern would be a common one for people to find. It is incredibly useful and can be linked with lots of other paths into or out of its characteristic path.

I also feel that I found the leg contact moves. Paul Rozaire in a previous interview for Bravo Stick said the same thing. And I think that is cool. When I first saw a video that he posted with the leg contact moves in it, I emailed him and asked about it but the youtube page it was one of his friends or something, so I never got to talk with him about it. But I think that it is wonderful how the world develops and there comes a time when new knowledge is necessary for us to continue beyond the place we were at before. And at exactly this time, the knowledge is made available to those who are open to it. It is very similar to Newton and Leibniz discovering Calculus at the same time, but in different places and from different points of view.

What are your favorite tricks?
I love contact moves!

In what style do you play and what other styles you like?
When leaves fall on pond water, gently moving through the transition from flight to float, there might be a moment when the waters surface vapor pressure pushes just right against the bottom of the leaf giving it one more moment in the space of weightlessness. Or there might not.

My style comes from the core of my being. It is calm and observable. I enjoy being able to see what is happening with the sticks and mellowing in it as it happens. This requires both slowing down the baton and slowing down your body. In addition you must speed up the mind without allowing this to effect breathing, relaxation nor awareness. You have to sink into your senses, minimize thought and blend into the sticks.

Within our minds we dedicate many linked paths associated with moving our image of our bodies around inside our image of our space. There are some dedicated brain areas for our Peripersonal Space. This is normally the space around us that we can reach. This is a fundamental type of knowledge for all creatures. The map of our bodies inside the peripersonal space is a tool we use frequently. When you spend an extensive amount of time using a tool, your brain dedicates space within the Primary Motor Cortex to include the tool in the map of the body. This extends the peripersonal space and the body map. Most people have well formed brain space for pens, forks, chop sticks, etc. By using other types of objects to explore and investigate the space around us, we can learn to more smoothly integrate the texture of the world into our image of our space.

When the baton and handsticks integrate into the brains frequency, that is my style.

I also like Will Young from Plumtree NC. His style very trick oriented, like a juggler. He has a number of moves that have the handstick balance on the baton and tosses through and around all parts of the body. Mike Sathers (Stixguru) is another one of my favorites. We've had a lot of fun playing together. Our flow styles blend very well and we learn quickly from each other.

What do you do on a normal day, how many hours do you practice?
Between 2001 and 2005 I played at least 2 hrs a day and up to 15 hrs depending on where I was at. These days I play when I perform or when I just feel like it. I'm very focused on Ball and Club juggling right now.

How is juggling life in USA? Are juggling sticks popular?
In the US there has always been an ebb and flow of the sticks in group culture. For the most part there are a few individuals who are really into it. I can think of 10 people in the US who have the enthusiasm and skill necessary to make a positive impact on the rest of the community on behalf of the sticks. I am around a lot of object manipulators all the time and I would say that less than 5% play with the sticks on a monthly basis. But there are some real power hitters. Will Young, Michael Sathers the StixGuru, Michael from JollyLama.com, Jaoquin (Ren Faire Circuit), Stycks Morton, Michael Fennie and Devilsticks Dave Hirshman from West Coast Juggling are the people to look out for. Everyone of them have a different style and openness to integrate new ideas into their styles.

Can you imagine not to juggle sticks any more?
If I was riding a magic carpet across the ocean to Australia where there was a huge bowl of Ben & Jerry's Ice waiting for me and a misguided comet came down and stuck my magic carpet, sending me and everything else out into the air flying. I would desperately grab for my sticks, so that when I found myself stuck on a desert island I could play. They definitely are more significant to me than any other prop. If I could only control my left leg, I would play with sticks with it.

What is your advice for beginner/advanced stick players?
Be patient. Repeat. Repeat. Repeat. If you are trying to accomplish a move, make an image in your mind about what you want it to do, then try to figure out if you need to touch the baton above the center or below the center. Think about what is possible then try. If you are playing and something unexpected happens... EXCELLENT!!! If you open to the unexpected you can learn from it. There is a natural way that rigid bodies move around non-rigid bodies. When the baton hits your knee, pay attention to what way it naturally wants to fall. Then try to understand that direction and flow with it. If you have a muscle memory reaction to any accident that could come up, then you will never look like you are chasing a stick around. Instead you will look like you and the sticks are one. And whether or not you realize that you and the sticks are one, it will always be true. All you have to do is remove the you part of it and one you shall be.