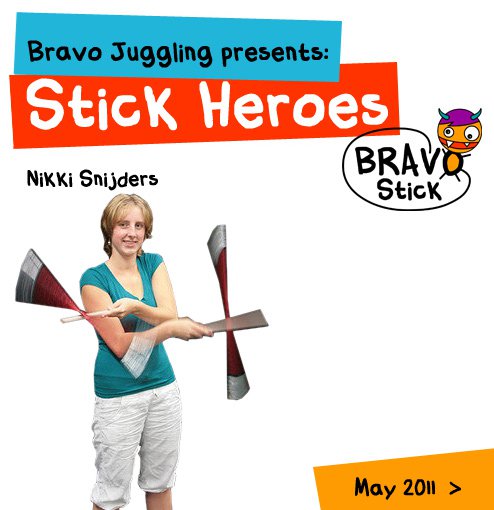 The first female interviewee of our Stick Heroes series is Nikki Snijders, the five-time Dutch devilstick champion, excellent 2-stick player who likes using acrobatic elements in her performances. Her life is devilstick, even her fiance asked for her hand in marriage after a show on the stage.

Your job/school: University of Groningen: Master: arts, culture and media

How many years have you been juggling with sticks: I think for about 8 or 9 years.

Number of juggling sticks you have:
Well, I think it's best that I don't count the sticks I use for giving workshops and also not all my broken sticks. I have 8 devilsticks, 3 firesticks and 1 lightstick. I have to say I almost never use the firesticks and used the lightstick just ones.

Your juggling achievements (prize / performance / trick that you are proud of / etc.):
- Dutch devilstick champion for 5 times in a row (from 2006 till now).
- Several open stages at juggling conventions and galashow in Aachen (Germany).
- Performances in the Netherlands in theatres, outside areas, gyms and stuff like that.
- I have a sponsor.
- I'm proud of the skill level with 2 devilsticks I got after one year seriously training with 2 (summer2008-2009). I became very motivated at the EJC in Karlsruhe.

Other juggling equipments you play with:
I can juggle 5 balls and do a couple of siteswaps and I can juggle 4 clubs and pass with 7. But I've to say I'm a lot more devilsticker. Next to devilsticking I do wire walking, a bit of acrobatics and I train german wheel for about 1,5 month now.

Are you a member of any team/group/club/association?
No, there isn't really a place for that where I live. But fortunaly or livingroom is quite big so I can practise almost everything at my own place. After the summer I hope to start a little juggling club in a schoolgym nearby.

Why did you learn to use this juggling tool and where did you first meet with it?
The first time ever I saw a devilstick was in a local park in Oldenzaal (where I grow up). Circus Keaphoj (Denmark) set up their tents there. In that time I was a member of the local youthcircus and we would have a guest-performance with Keaphoj during that week. They had a devilstickact. All I can remember of it was that they could do the propeller and that I had never seen that before and wanted to learn that. A couple of weeks later I visit a circusshop with my mother and a friend and bought my first devilstick and a tutorial book. I started at the first page and worked through whole the book because I wanted to learn all the tricks in there. The last trick was the double propeller, I've learned that when the book was already covered in dust.

Where did you learn playing with devilsticks?
In my bedroom at my parents place or outside. I can't remember I ever broke something so I think I was quite careful. I also went outside a lot with my friends who also bought devilsticks. We learned it together, which always helps in motivation I think.

Which trick did you find the most difficult to learn?
The tricks I'm working on right now are the hardest tricks so far, but I'm still very motivated to let them succeed. I can't really remember learning the single or double propeller. I know it took quite a long time before I started to try the double idle. I had tried it a couple of times and it felt really hard, but I started really training it when I was ready for it and after all it wasn't that difficult. Not difficult enough to loose motivation, fortunately. And what I think is really difficult are balance tricks, in some way I don't have the patient for that. I can do the basic tricks, but nothing more.

What are you practicing at the moment?
A lot of high throws with 2. 2 at the same time, in every direction, different patterns and all kind of that stuff. I started that because I wanted to make my 2-devilstick-combos more dynamic and because that I coudn't do nice tricks with high throws and thought that that was a shortage in my tricks so far. I hope to make a new video this summer including all the tricks I practised in this year so it becomes clearer.

Do you have tricks that you found out?
I think when you come to a certain level everybody has tricks that he/she found out. If they're never been done before, that's another question. With 1 devilstick I've some tricks which combines a 1-devilstick-trick with throwing the handsticks.  With 2 devilsticks I like to make combination of tricks like a stop'n'go in one hand and an idle in the other and stuff like that, or making a longer devilstickcombo where I go from one trick straight to another for a couple of times. So far I've never seen anybody else doing that kind of stuff but of course I'm not sure about that. I only can say I found out that tricks by myself.

Which tricks are your favorite?
Not really one trick in particulary, I really enjoy making combination with 2 devilsticks where both hands do other tricks and not one of them doing a propeller and I like to make long combos.

Which is the most difficult trick that you would like to learn?
I haven't figured that out yet. I guess that changes every year or so. Problem with some of them, I don't really want to learn them: like a balance throw from one hand to the other hand and a propeller pass at the same time. Sounds great, but I don't really like balance so I think I don't want to learn it, I want to be able to do that. What I want to learn now: chaos devilsticking with two: it doesn't matter where the devilsticks go, I have them. Very difficult, maybe not really nice looking, but great feeling I think.

In what style do you play and what other styles do you like?
Quite a quick up-tempo style and the last two years I almost only practised tricks with 2 devilsticks. I also like the really slow and contact styles, a bit the opposite site of what I do myself but it is also really nice and creative. I always thought I didn't like grabs that much, but the last couple of years I saw grab based routines and that's also very nice. I think I just like devilsticking, not really one style more than another (when it comes to looking at it, training is a different story).

Do you play with firestick?
No, it's a bit limited in my opinion and with it the tricks are less visible.

What do you do on a normal day, how many hours do you practice?
I try to make 1 hour a day. Unfortunately I'm injured quite often which makes that I sometimes can't train for over a month (this year 4 months). I only do performances in that period and don't learn new tricks, really frustrating but I also learn from that. Because it's not always bad to 'not devilstick' for a while. It gives your brains some time to think about the trick or something like that. I'm not quite sure what it is but most of the times I start training after a break I've to retrain for a week and after that I'm better than before the break. I think the understanding of tricks has something to do with it. It's not all about repetitions, you also have to understand and analyse what you try.

How and where do you practice?
How? Quite structural I think. I always start with some tricks that are easy for me, than tricks that I can do around 7 out of 10 times and after that I try new tricks/ hard tricks. I train in the livingroom with 2 mattresses in front of me.

Can you tell us how a juggling stick competition is? How did you train for it?
Well, it's nerve-racking the first time but also very much fun. The first few times I started training a couple of months before the competition. For me it all began with looking for the right music. After that I started with making a routine with a duration of 4 minutes. The judges give points on technic, style, creativity, podium-use and that kind of stuff, so I tried to combine all those elements in my routine. After I found the music I made a list of all the tricks I wanted to show. Than I figured out how I wanted to begin my routine and from there on I listen to the music and try to combine the right trick with the right piece of music and thought about things like moving, using some acrobatics moves and stuff like that. This was all paperwork (apart from checking the lenght of the tricks I wanted to do). Than I had a really long list and only I understood what it all means, for example: 0.45-0.48 go r-u on first tone, straight leg and do half helicopter millsmess. And that for around 40-50 tricks. Then the real training start, hours and hours training on the music to get the routine in the head. When I had the whole routine in my head I began with the perfection of the routine. In the year I organised the dutch juggling championships myself I really hadn't that much time for doing all this and I made and trained my routine in the last month. Last year my routine was improvised.

Do you still take part in competitions?
In september is the next Dutch competition. I won't be a participant. My motivation for this championship is a bit gone, maybe after a couple of years again. I hope there will come some European or world championships in devilsticks (maybe they already excist, but I don't know them). I like the competition aspect so I would participate if I can.

Do you teach juggling?
I teach circus at youthcircusses, and devilstick is a part of circus of course. Apart from that I give workshops in juggling for schools, businessparties and stuff like that. Sometimes I give a devilstick workshop (mostly at conventions).

Why do you like juggling sticks?
That's a good question. I think it is the challenge, it never ends and you can always come up with new tricks. I like to learn new things and that's what makes juggling/circus in general really interesting. You can always challenge yourself on the level you want. Why I like juggling sticks more than juggling balls? I don't know what it is, it just is.

How do you imagine yourself being old? Will you still juggle?
That's one thing to be sure of.

Can you imagine not juggle sticks any more?
Never? No, I can handle a couple of months if it's really necessary, but after that.....

What do you advice to beginner/advanced stick players?
Always have fun in what you're doing is the most important. Apart from that, making as many repetitions as you can isn't the best way. Analyse every attempt and try to really understand what you're doing and why it did/didn't succeed. And visit juggling conventions and watch videos for inspiration.