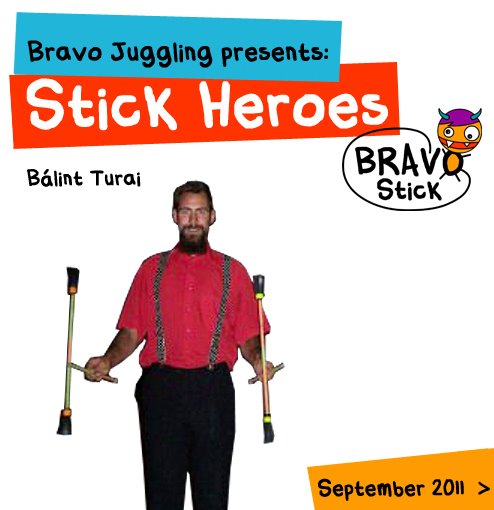 Bálint Turai first met to devilsticks almost a decade ago and altough recently he just plays in his free time but this tool introduced him the world of juggling which become his profession. With his team, Almost Trio, he performed at many festivals and circuses - such as in the Capital Circus of Budapest.

How many years have you been juggling with devilsticks?
I started 9 years ago, and approximetly for 3 years now those are not my main tools, and for this reason since then I use them less often.

Number of devilsticks you have:
As I often teach children I have many. I use 4 on a performance.

Your juggling achievements (prize / performance / trick that you are proud of / etc.):
- This year Almost Trio won the Special Prize of the Kiev Circus Academy at the Kiev Circus Festival.
- At the beginning of this year we worked for two months at the Capital Circus of Budapest, which was an old dream came true. (these has nothing to do with devilsticks :-)) [We saw that Bálint played the devilstick on the stage in the intro part of the show! - the editor]
- There are a few tricks as well with one and two sticks that I found out and I'm proud of them, but seeing what others do these days my tricks may not worth mentioning.
- I made up combinations with clubs which I have not seen from anybody else, but what I am the most proud of is our 4 club "take out" trick and the 7 clubs passing routines with Rike (the other member of the Almost Trio). Those are also our own designs.

Other juggling equipments you play with:
I use clubs mainly, but I can move all the common juggling tools at a basic level.

Are you a member of any team/group/club/association?
I am a proud half of the only two-member trio of the world, called Almost Trio.

Please write some sentences of yourself in general:
I was born very young  [ ;-) ] in Budapest. I attended school diligently and as a result I almost became a traffic engineer... Thank God I came across a devilstick just in time, which radically has change my life. I have tried different ways to get by as a juggling performer, and the current form of it is our previously mentioned "company". In the receint years we had works in circuses and theaters. Now I am spending most of my time for preparing to the birth of my daughter, which can happen at any time.

Where did you first meet to devilsticks?
When I was a student at the university, I borrowed a devilstick from a guy at the dorm. That day I couldn't take it down for about 8 hours.

Where did you learn playing with devilsticks?
Next to the university, on the shore of Danube.

Which trick did you find the most difficult to learn?
I cannot remember. I think none needed extremly much time and energy but on the other side none came easily. As I usually practiced and discovered the possibilities of the tool alone, I had to experience all the moves for myself.

What are you practicing at the moment?
As I mentioned, I don't practice the devilstick very intensively. I just try to maintain the level of the old tricks. Sometimes I try out contact moves which I haven't done before.

Do you have tricks that you found out?
As first I practiced alone, I invented a lot of tricks which it later turned out already existed. A few others remained that I have not seen yet done by others, although I have not seen many devilstickers.

What juggling styles do you like?
I like the slow, lightsome, airy style with contact tricks and dancing elements. Maybe for the reason that I have never done similar thing.

Do you play with firestick as well?
Sometimes.

How do you spend a day? How much do you practice?
I'm usually not an early riser. I get in the rehearsal room between 1 and 2, where primarily we practice the elements of the circus performance with Rike for about 2 hours. Then I have time for anything what I want: juggling for fun, practicing new tricks, practicing with other tools or do anything that needs the atmosphere of the rehearsal room. I usually finish between 6 and 8. This has been greatly shortened because of the pregnancy. We just go through the "required" elements. Now, I have to develop not in juggling.

Where do you practice?
At the rehearsal room of MACIVA (Hungarian Circus and Variety Company).

Do you attend competitions, conventions?
Not really.

Where do you perform?
Circuses, theatres, festivals, events of cities and companies.

How do you make the coreography?
It took a long time to create our current performance. I cannot say that it was just one occation to compile it in the rehearsal room and we have done the same since then. To get a circus performance ready you need many shows. Attention should be paid to the audience's reaction, and according to that emphasize a trick, remove or modify an other. Basically, the dynamics of the music determines lot of thing. It's important that the moves and the music be consistent. We try to find the tricks to fit where the sequence of events, and the music requires. It never succeds first time. We had a lot of variation, and even now we can find better solutions which are worth to be used instead of a variation we believed to be tested enough. This requires ongoing work and best is when we can perform regularly to test everything in action. Often the success of a trick or a joke (I mean whether the audience likes it or not) depends on the timing. Unfortunatelly we cannot practice these in the rehearsal room. If you have no opportunity to perform, then an outside observer, in whom you trust, can help a lot.

What factors do you think a successful performance depends on? (What other things are needed on the stage in addition the skills of juggling in your opinion?)
Diction, Improvisation skills, Calmness, Self-confidence. (Now suddenly they came to my mind, but surely there are more components)

Are devilsticks accepted, esteemed in the circus world?
I could count on one hand how many devilstick jugglers I met in the circus. Devilsticks are not popular among circus performers so you cannot see many good quality performances. In my opinion, if someone came up with a really good devilstick show, the circuses would pay for it. But the really good devilstickers might not get there, to show themselves at a circus festival. Not to mention that you have to do a completely different performance on a juggling convention than on the circus stage.

How do you prepare for a show?
We don't need extra work as we practice our performance every day. We know the dates of the most important shows several months in advance so we can schedule the possible changes. We already know the tricks, so as the show is coming we put the focus on the small details, the acting style, the concordance with the music and with each other.

How is it preparing, performing alone and in pairs?
I do not even know the last time when I performed alone, but I do know that I like to work together much more.

You had serious and funny performances as well, which do you prefer?
If I had a serious one, than that must have been a blunder. I didn't know how to make a funny one or it just didn't work out.

You performed in the Capital Circus of Budapest, how was it? Was it more difficult to prevail as you didn't come from the artist school?
I really enjoyed it. Everyone was very nice and there was a good atmosphere continuously in the backstage.
Of course, it took some time until a habitual, closed community accepted us. When we got to the big circus we had already got over it. There we didn't feel that we would had been treated differently.

Do you teach juggling? What are your experiences?
Yes, mainly children. That would be long telling my experiences. In short, I think everybody should learn to juggle around the age of 12-13 years because it has a lot of advantages on boht the physical and the personality development.

Do youjuggle on the street sometimes?
Yes, I do. I love it. The best school.

Why do you like devilsticks?
Those relax me. Kind of active meditation.

What are your strong/weak points?
I am tailed away with the contact tricks.

What kind of devilsticks do you prefer to use?
I like the slow flowersticks.

What is your goal related with devilsticks?
I don't have performance plans with this tool. Nowadays the devilstick remains for relaxation and hobby.

What is the most difficult trick you would like to learn?
That would be great to play with 3 sticks stably.

Can you imagine not juggle devilsticks any more?
No.

Who do you recommend the devilsticks and why?
To anyone because it is a very creative toy. It is a great fun just experiment it for some minutes but it can become a lovely free-time activity easily for some.

Why are devilsticks better than other juggling tools?
You can use it for all type of object manipulation. It can be balanced, thrown, contacted, spined, etc. One of the most manifold juggling tool, which combines many different games.

What do you advice to beginner devilstick players?
Be persistent, patient. Never be mad when the stick falls.

What do you advice to advanced devilstick players?
Find yourself in the game, let your imagination work and let the unexpected happen.