Where does the devilstick come from? Learn about the origin of the devil sticks.

The most we know about the origin of the devil sticks is from Lukas Reichenbach - he happens to be a Stick Hero too - who has spent 5 years to research as many stick juggling sources as he could discover and has gathered an impressive collection of devilstick related materials. Here you can watch the recent video about his findings. We will showcase the essence of his work, completing it with some other facts that we found interesting.


The first traces of stick play are from Asia. We do not know whether the devilstick originated in China and traveled to India from there, or the other way around.

1758. First written description of the baton play:
It is an acrobatic act evolved from Da Lian Xiang. A performer with a slender baton in each hand used them to poke a third baton which sometimes twirled, sometimes nodded, but never fell down. The performance was permeated with singing, dancing and acrobatic fighting.

1820. The Manipurese developed a distinct martial art form, known as Thang-Ta. The people of this tiny kingdom could defeat the armies of Burma and neighboring countries by the culture of this art. 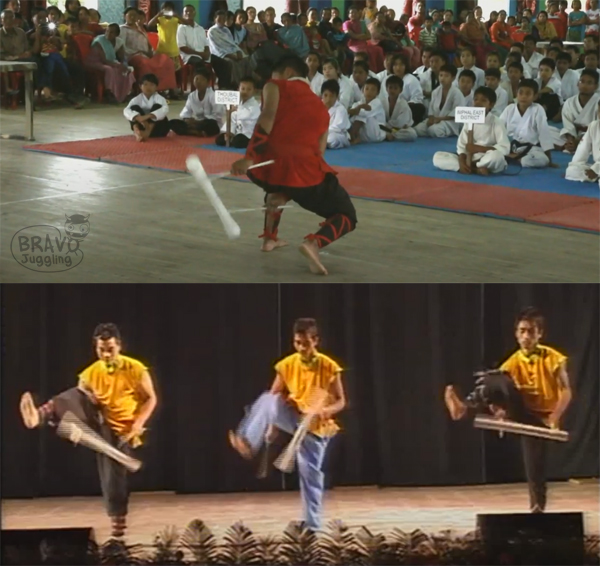 Even today, as we know as devilstick is still celebrated by the Meitei living in the region of Manipur, India, as the part of their cultural heritage.

Baton play found its way to the repetuare of some Indian travelling performers who ended up in Europe at the time of the British colonisation of India. The exotic, oriental performances (e.g. ball juggling, spinning tops, sword swallowing) were popular this time. 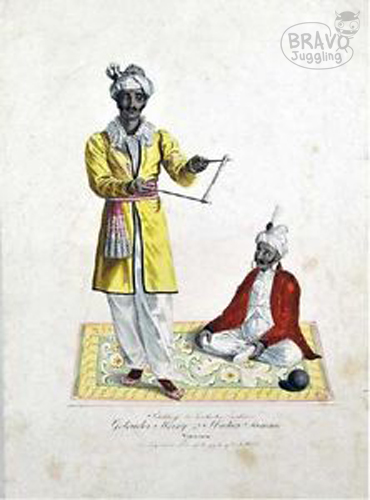 European artists were fascinated by the skills of the Indian jugglers and started to copy their tricks, costumes and even the name 'Indian Juggler'. 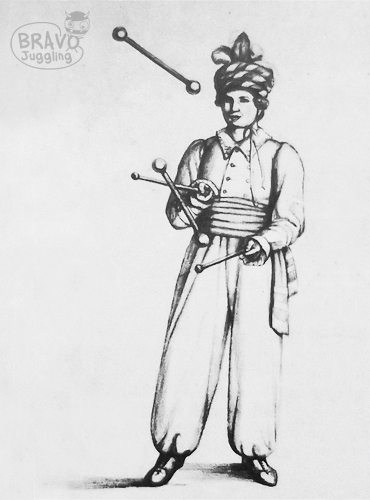 Carl Rappo / Karl von Rapp (1802-1845) a German circus artist was one of the best jugglers of his time. He could play with two devilsticks and had many other skills too. 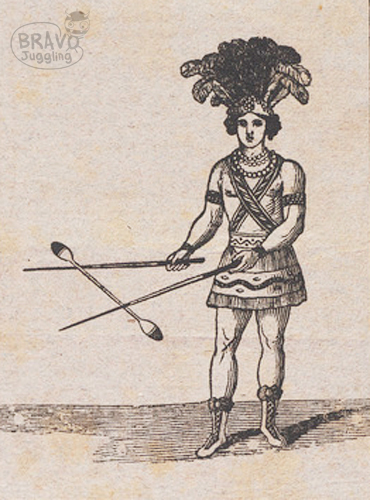 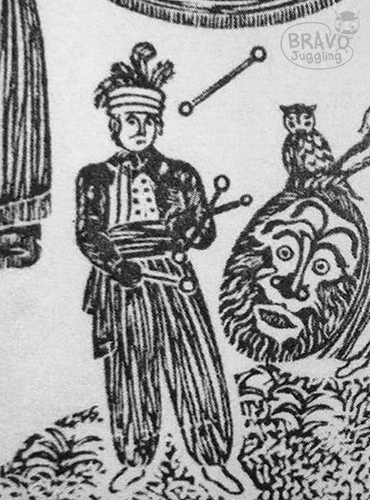 
Josephina Schulz was the first woman who was verified to play with devilsticks in 1832 but sadly we have no picture of her.

From 1850, the circus was becoming the dominant force in the performance industry. The devistick lost its significance because its size was too small compared to the measurements of the circus tent. The devilstick should compete with large-scale acts (e.g. aeriel acrobatics, rope walking, horse show). Nonetheless - or rather even so - some performers tried to combine the devilsticking with other acrobatic elements. 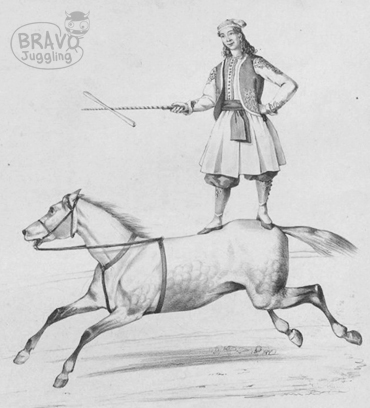 This artist shows devilstick tricks on the back of a horse. 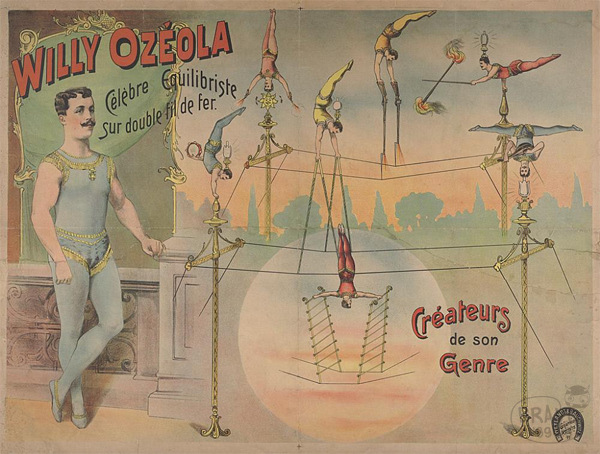 Willy Ozéola combined aeriel acrobatics with devil stick manipulation, as it can be seen on this poster. It is also one of the first picture of a fire devil stick. 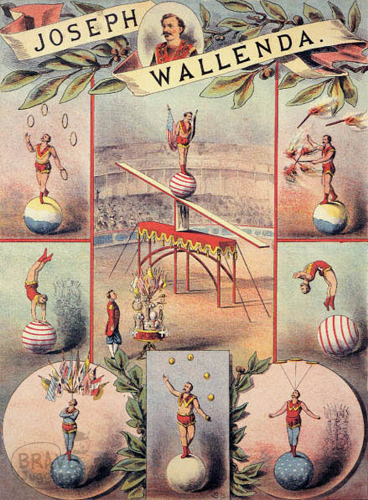 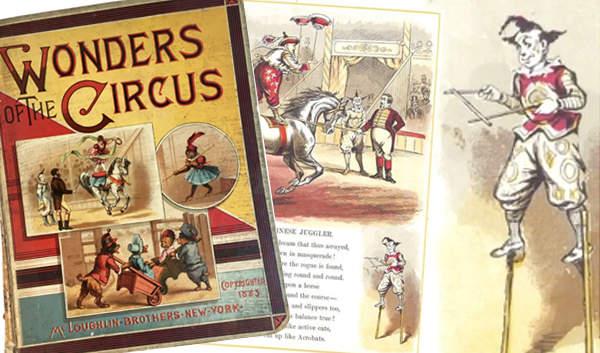 There is a Chinese juggler devilsticking on stilts in the book titled 'Wonders of the Circus' by the McLoughlin Brothers (1883). 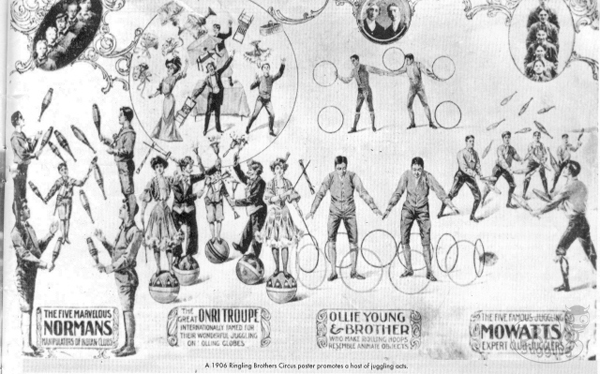 Two women from the Onri Troupe performing devilstick on walking globes in the Ringling Brothers Circus. (1906)

Other Interesting Finds of This Period 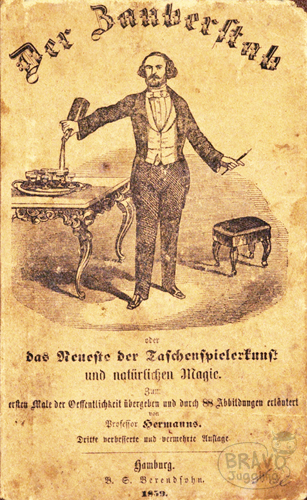 1859. A German book with the first description on how to make a devilstick 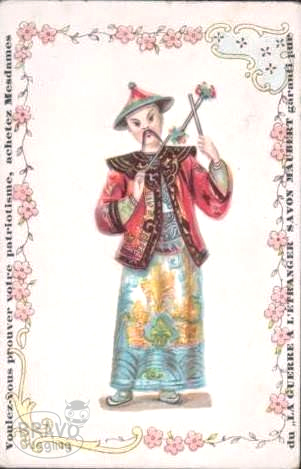 Around 1880. French soap advertisment with the first drawing of a tassel-ended devilstick (called a flowerstick nowadays) 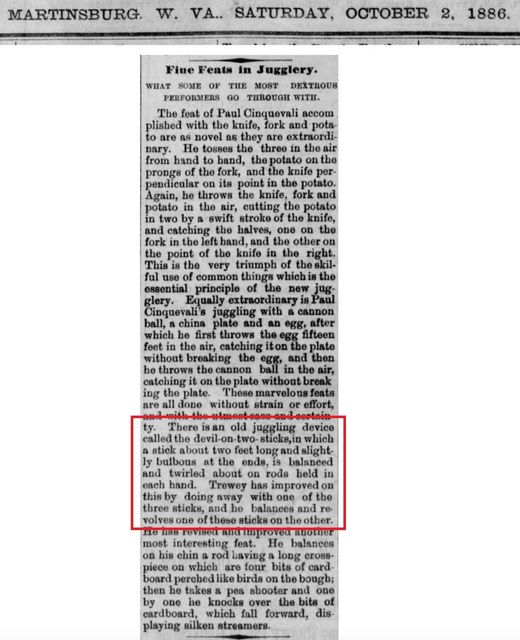 Early 20th century - The Rise of the Vaudeville

Sadly, we know nothing about the birth of the name "devilsticks" but it was first used in the American vaudeville scene. Vaudeville is a theatrical genre of variety entertainment born in France at the end of the 19th century. It was also popular in the United States until 1930. A typical American vaudeville act included musicians, comedians, trained animals, magicians, acrobats and jugglers. 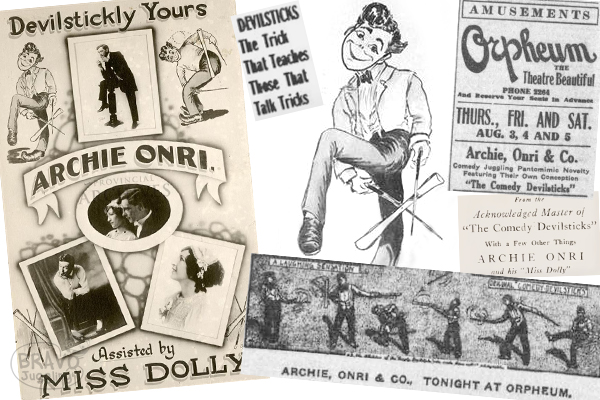 1916. Archie Onri was the first "Acknowledged Master of Comedy Devilsticks". Together with his assistant, Miss Dolly, he performed a 20-minute-long juggling act which was very well received by the audiences. A poster and many newspaper articles and advertisments remained about him. 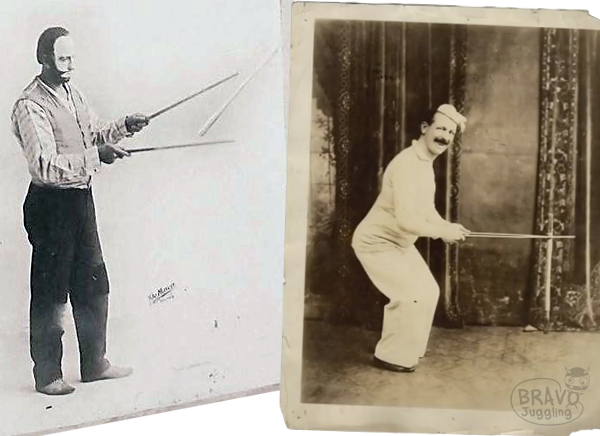 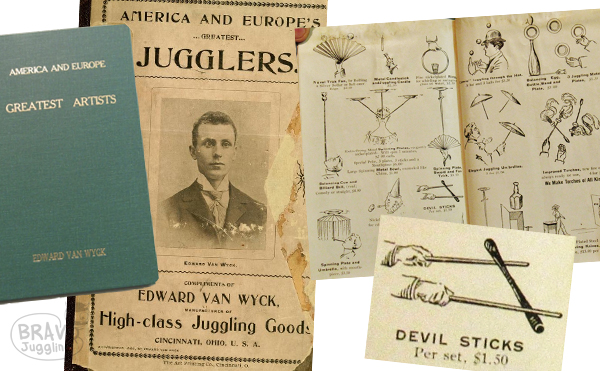 1912. Juggling catalogue with the first industrially manufactured devilstick, published in the second edition of the book titled 'America and Europe’s Greatest Jugglers' of Edward Van Wyck. He was a juggling prop maker who opened for business in Cincinnati, Ohio (USA) in 1895. In 1900, Van Wyck published a well-known book that featured jugglers from the USA and Europe using his juggling and circus props. The first half of the next edition included jugglers and a few other variety acts, the second half featured an in-depth catalogue of Van Wyck’s juggling and circus props including a devilstick.


The new (tele)communication techologies allowed the quicker spread of the information among jugglers and towards the general public. Jugging and devilstick became more and more well-known, and from a profession, it started to turn into a free-time activity that anybody can try and learn. The mass production of the juggling props has started and the first juggling brands borned.

1944. The first magazine dedicated just to juggling: 'The Juggler's Bulletin' published by Roger Montandon monthly. It was a mixture of gossip, humor, descriptions of acts, convention news, photos, and advice on how to do tricks. This magazine was one of the first steps forward to the foundation of the International Jugglers' Association. One of the issues of 1948 featured a longer, illustrated article about the devilsticks by Bert Hanley titled 'Concerning Devil Sticks'. 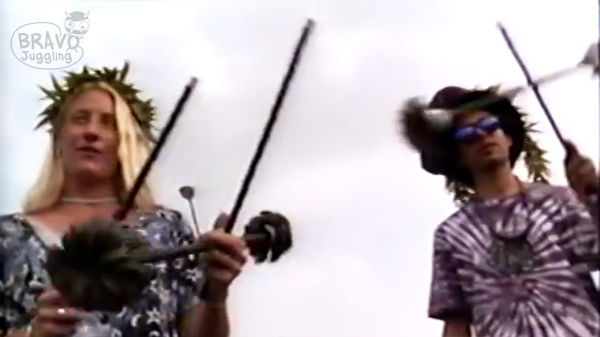 1980s. Tassel-ended devil sticks started to appear at the hippie scene, it spreaded among the fans of The Grateful Dead. This American rock band toured constantly throughout their carrier, playing more than 2300 concerts. Many of their fans followed the tours for monthes. Around concert venues, an impromptu communal marketplace was created where fans could buy and sell food and homemade items, like tie dyed t-shirts and flowersticks. (The illustration is from a documentary of 1994 titled 'Tie Dyed Grateful Dead Parking Lot Scene.) 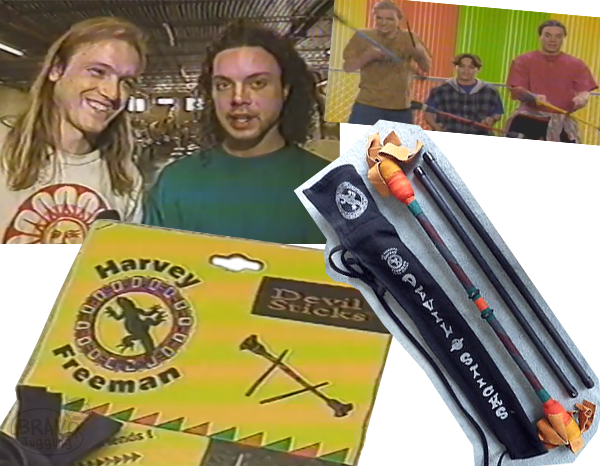 1995. The Harvey Freeman Devil Sticks was the first mass produced devilstick for the toy market. This flowerstick was the product of Harvey McLeod and Christopher Freeman. Their success story started in 1990 when Harvey sold handmade t-shirts on the street and used his brother's devilstick - which was from a Grateful Dead concert - to draw attention. As people were more interested in the devilstick than the t-shirts, he changed to make those instead. He sold the first set of devil stick to Chris, an amateur juggler friend who helped him refine the design. The two eventually went into business together, moved to Montreal, got some publicity in the Canadian press and attracted the attention of two businessmen who persuaded them to mass produce the sticks with a "few hundred thousand" of seed money. The small Canadian devilstick business grew almost overnight into a multimillion-dollar company.

1995. Devilsticks craze in North America:
- Devil sticks ranked among the top 10 selling toys in speciality retail shops (according to a survey published in the trade publication 'Playthings'.)
- Devil sticks became the No. 1 selling toy in Toys R Us of Canada.
- An other Canadian toy producer company, Spin Master sold 600 thousand units of devilstick in this year, plus 1.15 million units in the next years.
- The 'Flowerstick' name was trademarked of a third Canadian company, Goudurix. So possibly a genericised brand name might be the origin of the flowerstick name which means tassel-ended devilstick.

Devilsticks became the part of the pop culture too. Check out our collection of films and music videos that feature devil sticks.
Back
Cookie settings
Our website uses cookies that are essential for basic operation. You can enable marketing related cookies for broader functionality. In this case you also accept the privacy policy